Captain, there be spoilers here!

Where to begin? I always had a slight ambivalence to the idea of rebooting James Bond. Yes, the films had a screwy continuity, it was difficult to accept that Connery, Lazenby, Moore, Dalton and Brosnan were playing the same person, and the films veered around in tone over the years. But the iconography continued, and some elements built up to create a history to the character that informed later films (most especially the death of Tracey in On Her Majesty’s Secret Service). Rebooting wiped that all away. But then I watched Casino Royale and thought, hang on – there’s something in this. It was brilliantly exciting, well-acted and pushed the boundaries of a Bond film while staying true to the character. But from there I’m not sure anyone knew what to do. Quantum of Solace has its moments but struggles from a weak script and poorly defined villain. Skyfall made a ton of money but has a really sloppy plot and is a catalogue of Bond’s failures (it does look nice though). Spectre is dull and has an outrageously stupid twist, making Blofeld Bond’s half-brother. In an echo of Pierce Brosnan’s era, there seemed to be a clear decline from an excellent beginning, as if the filmmakers, having worked out how to relaunch Bond and make him relevant for a new time, then got lost (I’m starting to think only Martin Campbell should direct these things). Daniel Craig’s movies have tried to create a clear through-line, to make his films connect and relate, to cure the continuity issues. No Time to Die hermetically seals his tenure and attempts to draw all the threads together, but in doing so we’ve lost sight of what Bond films are for.

Of all the reviews I’ve seen of No Time to Die one on Twitter struck me the most. In it a father describes taking his son to the film – the first Bond film he’s seen in the cinema. A lot of us remember that moment of seeing our first Bond film on the big screen, mine was GoldenEye – I walked out of the cinema feeling 10 feet tall, replaying events in my mind and determined to see it again soon. The Twitter user’s son came out of his first cinematic Bond film experience in tears. And he was supposed to. Somewhere the producers have convinced themselves that Bond films must have ‘meaning’ – it was creeping in during Brosnan’s tenure (all that stuff about dead women), attempts to peel back the layers of Bond – but in doing so they’ve abandoned the very escapist nature of the films that made them popular in the first place. For many years the only point of a Bond film was to entertain, No Time to Die wants to move you. And there’s nothing more moving than killing your hero. Just like in Avengers: Endgame or, perhaps, The Dark Knight Rises (the debate continues on that one). But that death has to be earned, and there has to be some sense of hope afterwards. For me killing Bond seems a sad, desperate attempt to surprise the audience and shows a disappointing lack of faith in the character. It comes in an overlong film hampered by left over plot threads from Spectre, and an uncertain tone. And in case you’re not sure what I just said, yes, they killed James Bond, your childhood hero, and not in a You Only Live Twice kind of a way, in an obliterated by missiles kind of a way. The film, however, lost me long before then.

It opens quite well, a flashback to Madeline’s childhood that introduces the villain, Safin (who disappears for most of the rest of the movie and lacks clear definition or motivation) then moves to Italy as Bond visit’s Vesper’s grave to finally close the door on his first love (it’s not a comparison that they should make, it only highlights the lack of chemistry between Bond and Madeline). Some solid action takes place, Bond dumps Madeline on a train, convinced she’s betrayed him (why is she holding her stomach like that?) before buggering off to Jamaica to fish and drink. So far, so ok. A trip to Cuba, at the behest of Felix Leiter, introduces CIA agent Paloma and the MacGuffin  – a nasty bio-weapon that targets specific DNA strands. As Bond’s retires there’s a new 007, Nomi, and there’s some fun one-upmanship between her and Bond (although something similar worked better in Tomorrow Never Dies). Then Felix gets killed and the film lost me. Why kill Felix? Meaning. It’s a pointless death, only designed to make Bond’s life, and ours, miserable. From there the film meanders and, perhaps, becomes a reflection of Craig’s view of the role – I don’t think Craig approves of James Bond, so he plays him as a haunted misery and then kills him off. There are more incidents of course, and it’s all nicely shot and there’s some reasonable action beats but Blofeld returns (wheeled out on a silly sort of conveyor, chained up in a box) to remind us of the stupid twist from Spectre, M’s character seems to have completely changed (from a defender of democracy and human agency, to a man who develops DNA targeting bio-weapons that can silently kill anyone in the world) and, ta-da!, Bond has a daughter (who to be fair was very cute). By the end Bond is addressing Madeline (while staring down the camera) as the missiles approach, declaring his love… I imagine I was supposed to cry. It did make me miserable, but not in the way they meant, I think.

Bond films get people into the cinema who don’t usually go. In the row behind me was an older couple who discussed how they hadn’t been to a big screen in five years. It will no doubt be a hit, and I will be shown (once again) to be out of step with most of the film-going public. But it was an odd, muted reaction at the end, the audience drifting silently out – no-one seemed to be walking tall.

So, we reboot again, I guess. Who knows what comes next – hopefully a set of films that aren’t afraid to be fun, to entertain, to take us away for two hours, to show us a hero who beats the bad guys and gets the girl. Simple enough pleasures. In a sense killing Craig’s Bond closes his loop, kills his continuity, and I’m grateful he’s not the James Bond I grew up with. Maybe I’m too old, they’re making movies for a different audience now, with different expectations. But I suspect I’m not the only one who would like some escapist entertainment, with great stunts and a hero who smiles once in a while. By the way, when is the next Mission Impossible out?

An interview with Crawford-Clark Close Up 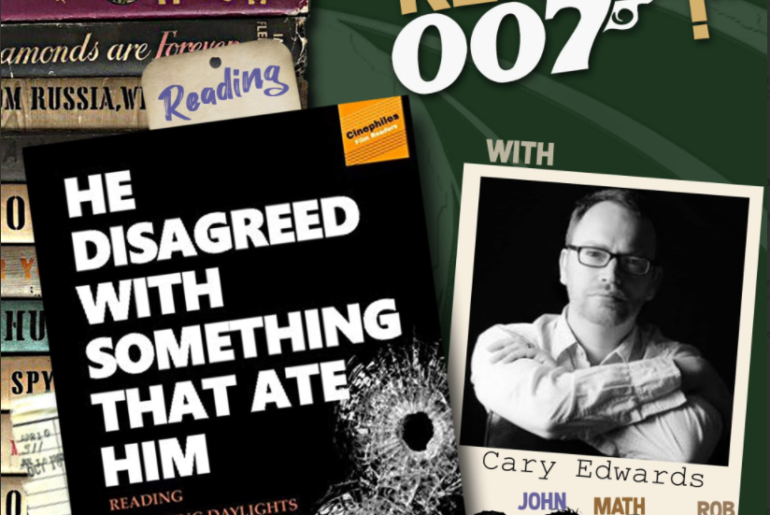