Teeth: A, Sort of, Superhero Movie

This article was first published by Bright Lights Film Journal on January 16 2018 (http://brightlightsfilm.com/watch-it-again-society-brian-yuzna-1989/).

After nearly 30 years Society has become a perfect film for the age of Trump.

A withering satire on the American dream Yuzna’s film deserves to be rediscovered as one of the most odd, interesting and radical of American horrors. Hiding under the guise of a teen horror is an attack on the myth of the classless society, a (quite literal at times) peeling back of Reagan’s America in which growing inequality is dressed up in Hollywood gloss. Its message, that the rich operate a closed society in which they exploit the rest of America, has now become more relevant than ever.

As an outsider looking in America’s dedication to seeing itself as a classless society has often seemed a little absurd. From the UK, where class pretty much defines everything, the stratification of America in terms of class looks strangely familiar. Despite this a recurrent desire to define America as a society in which everyone is effectively middle class continues. Trump’s ascension is the story of man living off inherited wealth using rhetoric to de-class himself to appeal to disaffected, and often laid-off, manual workers. That this worked, despite the fact that he is exactly the type of asset stripper and outsourcer responsible for the economic status quo, demonstrates the power of myth in society. Whatever the particular niceties of Trump’s ability to make himself seem like a “regular guy” it’s a well-worn trope of American culture that he tapped into, one that turned against Hilary Clinton tainted, as she is, with the whiff of elitism.

This unwillingness to confront class divisions extends into American cinema, where the American dream is consistently reinforced and class is hardly ever a barrier for those who want to work hard. In many ways the Rocky franchise stands as the apotheosis of the myth of a culture in which everyone gets their shot at the title. Social mobility, we are repeatedly told, is available to all just as long as you work hard enough. The success of Stallone, and his 1980s rival Schwarzenegger, reinforced this myth as much as their films did – the self-created stars who through force of mind and body could transcend their poor origins to rise to the peak of Hollywood success.

For most, of course, this never happens. For every success there are numerous hard working people buying into the dream and never getting anywhere. In Society this exclusion from getting on is transformed into a world where the rich are not just different, they’re not human, and they literally feed off the poor.

Having made some waves in horror as producer of Re-Animator (Stuart Gordon, 1985) and From Beyond (Stuart Gordon, 1986), both based on Lovecraft and both employing body horror, Yuzna took a decidedly left turn with his directorial debut – it’s truly a film like no-other. Yes, it supplies the body horror, ably created in all its sticky glory by Japanese effects expert Screaming Mad George, but it fuses it with teen movie, conspiracy thriller and absurdist comedy in a way that would make Dr Herbert West proud. 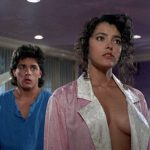 On the surface Society plays on recurrent adolescent fears of entering adulthood, especially in the realms of sexual relations. In many horror films, especially in the Slasher sub-genre, anxieties faced by the adolescent are dramatized; the killer, or monster, which must be conquered stands in for the desires/fears that need to be repressed for successful entry into the symbolic order. That the monster has a sexual ambiguity to it has been noted and extensively examined (particularly by Carol Clover). In many respects Society follows this formula as it centres on Billy Whitney (Billy Warlock[i]) a High School student. Billy is popular, has a cheerleader girlfriend, and has recently acquired a new Jeep Wrangler. However, and though he visits a re-assuring psychiatrist, a tape recording shared with him by a fellow student, Blanchard,  reasserts Billy’s belief that there is something wrong with his family and their friends and, by extension, the wider high-class society he is part of but feels alienated from. Through various scenarios Billy’s paranoia develops until all is revealed – he is really a fatted calf, raised to be sacrificed in the Shunting, an orgy of twisted bodies where normal people are absorbed by the higher ups – judges, politicians and business leaders. It’s a hysterical sequence that paints the ruling class as sexual perverts who prolong their, possibly eternal, existence by draining life from the poor.

Under the guise of a teen horror Yuzna manages to twist familiar genre tropes in service of his political message. The high class setting immediately sets Society apart from other teen horrors of the era as it eschews the everyday nature of most where-in, such as in A Nightmare on Elm Street (Wes Craven, 1984) and Halloween (John Carpenter, 1978), the main characters are located in a ‘regular’ neighbourhood, remarkable only in its interchangeableness with those in other teen horrors or in the isolated teen-spaces such as the camp, as in Friday the 13th (Sean S. Cunningham, 1980). Society is also different in having a male protagonist rather than the final-girl that features in most, if not all, 1980s teen horrors  – a male teen idol who, for many, could stand in for wholesome values. Society plays a subversive game with genre, moving the familiar context to one which appears aspirational, and tied to mainstream ideas of success. The Whitney household is a Beverley Hills mansion, pristine and white, overtly displaying the wealth and advantages Billy expects to inherit – however his alienation from this lifestyle is evident from the beginning and is also encapsulated in his appearance: dark-haired when the rest of the family are blonde, shorter than his sister and school colleagues (he is literally looked down on by this ideal, Aryan, family). “They don’t even look like me” he tells Dr Cleveland, but the difference also suggests a paranoia that the film plays on, editing being used to undermine Billy’s gaze, replacing disturbing images with those that are more normal and asking the audience to question the reality placed before them. 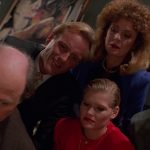 The opening of the film foregrounds this willingness to be subversive and to blur boundaries between reality and fantasy. A typical dream sequence occurs in which Billy, clutching the classic slasher weapon of the kitchen knife, walks scared through his own house, only to be confronted by his mother all the while a female voice sings a haunting rendition of the Eton Boating Song (reminiscent of the use of nursery rhymes in the Elm Street series and tying the film to old-world class structures). The film cuts to the psychiatrist’s office where Billy confides his feelings of fear and dread to Dr Cleveland. Billy takes an apple and bites, revealing worms within. It’s an obvious but still potent symbol of the corruption under the skin in this supposed Eden. Then, adding another surreal layer, it cuts to a flash-forward of the Shunting, allowing us to see merged body parts, covered in a sticky fluid with muted moans as the Eton Boating Song Resumes with a new re-written lyric;

This layering is disconcerting in its denial of familiar tropes and the missing context for the images. Billy we can presume is the protagonist, but his circumstances straddle an umheimlich situation, wealth familiar from various soap-operas, commercials and glossy magazines, juxtaposed with paranoia, anxiety and mutated bodies. The lighting and Dutch-angle of the opening sequence situate the film firmly in the horror genre, but the following shots disturb the reassurance any generic recognition might bring.

Society also takes the metaphorical desires and problems of other teen-horrors clear and makes them obvious. Halloween, in its first person prologue, hints at incestual desire as Michael Myers kills his half-naked older sister immediately after she has had sex with her boyfriend. Society deliberately places Billy’s sister Jenny as a figure of desire, both for Billy and the spectator, in a scene where she showers. However as it foregrounds this desire, it simultaneously undermines and perverts it by suggesting an unnatural and impossible configuration of body parts; Jenny’s torso appears twisted so that both her breasts and buttocks appear through the frosted glass. This highlights one issue, the amorphous bodies of the Shunters, and also implies an incestual element to the gaze. In Elm Street the sins of the parents, in their killing of child murderer Freddy Kruger, is played out on the bodies of the teenagers while their parents exist in incompetent denial. In Society the parents are the sin, a secret hidden in plain sight, their bodies the site of perversion and horror.

The fluidity of the human body on display in Society differentiates it from earlier examples in the genre and is indicative of contemporary sexual politics, especially in light of the aids crisis during the 1980s. The Shunting sequence sees body parts swap place and people intertwine. Yuzna uses some of this for humour, Billy dad becoming a literal “Butt-head”, and some to push boundaries linked to sexual hysteria: the incest between Jenny and her mother, the gay kiss between Ferguson and Billy. Most pertinent is the emphasis on penetrability of the human body, especially the penetrative potential of the male anus, through which both Blanchard and Ferguson are killed. The merging of the human bodies that occur during the Shunting evokes the female body in several ways, not only in the representation of penetrability. Through a perverse eroticism is evident in Society, finding its apotheosis in the Shunting. Both objects of Billy’s desire, his sister and eventual love Clarissa, twist their bodies at the waist. The anus again becomes visible and accessible to the male. This homo-erotic anxiety pervades then throughout the film, initially played out on the bodies of women, then seen more obviously during the Shunting. It is Billy’s ability to avoid penetration, and his penetrating of Ferguson, that allows him to escape. This subverts his class role (as member of the under-class) but disavows the homo-sexual eroticism from earlier in the text. 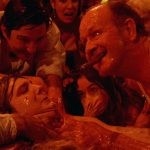 The sexual anxieties that run through the film connect directly to the class rules of American society in which the majority are encouraged to live sexually “normal” lives of heterosexual monogamy. The upper orders are free to indulge their perversities safe in the knowledge that the Police will protect them, rounding Billy up in the film. Access to the higher sections of American society is prohibited too, Billy losing his High School election despite being the most popular student in School (which also costs him his girlfriend). All his entitlements are stripped away from him in the film as it becomes clear he is not one of “them”, his dream-life crumbling. Rounded up by the authorities Billy, and us, witness the Shunting, an orgy organised in honour of a Judge and attended by various figures from Washington in which Blanchard is drained of his nutrients. Finally Billy realises that he is adrift in a society he cannot enter and one that sees him as food, his paranoia is real – Society is designed to work against him. The end of the film leaves the status quo intact, the powers that support are to large to simply be undone by one man.

A flop on release in America (two years after production) Society found an audience in Europe where class divisions are more openly acknowledged. It deserves to be rediscovered in modern America as a radical departure from genre norms, but also as one the most searing critiques of the American Dream.

[i] Warlock’s casting adds an intertextual meaning due to his role in The Days of Our Lives preceding Society. The long running soap-opera features the aspirational life-style satirized in Society.